The Grollen of the realms a fierce, prideful peoples. They are descendants of ancient Gnolls but consider themselves a separate race. At one time they ranged across the entire realms, but their numbers are diminishing due to competition. Grollen warriors are some of the few who can stand toe-to-toe against the fearsome Ork. They are desired for their fighting prowess by the other races though little else. Wherever they go, a party, mad sounds, dancing, violence, and broken crockery is sure to follow…

Shrouded History: They were not as they once were. Grollen were once the mortal enemies of… all. Their origins are shrouded in mystery, but it is known that they once fought for the gods of evil and darkness and were as great a foe as the Orrish. But the Grollen walked from the dark and into the light. Their very countenance has changed from the ancient depictions of them.

Children of the Moon Mistress: They venerate Ezrilus the Moon Mistress as their patron goddess. In their past, the warlords ruled the clans and families, but since adopting (or rather being adopted) by their new patron, they have reorganized as a matriarchal society – their pack-mothers and seeress’ having control of their migrations and settlements. They channel their rage and fury into moots of howls, dance, feasting and wrestling.

Goddess Power: Grollen with Shared Litany of the goddess and who spend 1 Essence to activate the power may 1/Short Rest use the Moon Faculties of Ezrilus followers for 1 encounter/10 minutes. If not done under moonlight itself, their own eyes shine forth with soft moonlight. Characters bound to the goddess heal an additional HP each short rest under the light of a moon which is 3/4 full or more.
Goddess Bound: Grollen who choose to follow a different deity must pay an extra Essence for any divine bond other than the goddess.

Thirst for Blood: They have an uncontrollable compulsion of blood-lust. All Grollen still possess the deep spark of chaos and violence of their origins. They must make a DC 10 Sanity check when starting battle to avoid falling into a blood-lust frenzy wherein they forgo all tactical advantage in their desire for bloody hand-to-hand melee combat.

Dead on Your Feet: Grollen have a reputation as being very hard to kill. Their fierce loyalty and blood-lust allow them to hold off death to protect their tribe, kin or brethren. Grollen choosing to employ this must make a Constitution check each time they are hit, DC = 5 + the last damage they took; a natural 20 always succeeds. Success means they stay conscious and on their feet to the next round. There is no limit to the negatives HP from attacks, as long as the save is made. If the save is failed, or there are no more opponents, they die at the end of the round (no death saves).

PC’s are “Seekers” PC characters are viewed without bias, as Seekers.
The Grollen never call those who have left the tribe ‘outcast’ or the like. The tribe will always welcome them back. Instead those who leave are considered ‘seekers’ – searching for something they could not find within the tribe itself, and to be admired for their bravery, not shunned. Seekers are still considered pack-brothers by their tribe and themselves alike. Leaving the tribe physically rarely breaks the bonds of tribe, family, and childhood pack-mates.
Players should read the What PC’s should know for Steel Realms.

Class choice in Incarna is a role-playing challenge more than anything. While any class is possible in the right situation/background, race, culture, gender, regional issues, and social norms all factor into what path a character is able to take. A full Character Background and Perspective Stories can explain anything, even complete deviation from any setting or rule restrictions. However, it is also these constraining elements that give the most role-play challenge (and reward) and should be encouraged. Multi-classing after character creation has only the limits the story and setting provide (aside from any normal Ability limits).

Armor Class: 15 (hide and shield + DEX)
War Flail: The Grollen war flail has an adapted grip that allows them to maximize the impact use their long arms and fingers (it is cumbersome and difficult for other humanoid species); they do +1 base damage while wielding it (double the cost for adapting the grip).

Ponderous: The changed physiology of the Grollen causes them to move slower; -1 Initiative.
Rampage: As per normal Gnoll of DnD (see MM); 1 extra action to move and bite after successful attack.

Typical Tactics: Grollen tactics are hampered by their Blood-Lust.

Grollen have a Large Bearing, and gain a full HD of HP at 1st level.

Speed: 35 feet; Grollen have a long stride and have adapted to long distance running (because their physiology makes it impossible for them to ride beasts comfortably), using their long arms to help them lope occasionally.
Practiced Runner: A Grollen can run twice as long at a normal pace before tiring.

Professional scouts for the armies and forces that maneuver across the lands of Gladnor, as well as the premiere tribal warriors. They are also the ones that serve in Northgate Garrison or in bands in the south sometimes working with the High Kings rangers.

Fighting Spirit The Grollen on campaign are renowned for their ability to take punishment and keep going and to come back from the brink of death. On any specific death save check (the final one resulting in death) which may kill them permanently, they gain their proficiency bonus.

Shield Bite: A Grollen on Rampage wearing less than Heavy Armor that successfully bites can choose instead to bite a shield of an opponent. That shield no longer counts in AC, and the Grollen and target both lose half any Dexterity AC adjustment until the Grollen lets go or the opponent spends an action to disarm the shield. 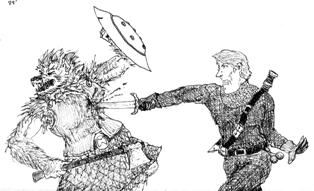 Tribal Matriarchs: Grollen tribes are organized around a Matriarch.

The History of Grollen in the Realms

Broken Origins: Grollen were not always as they are now. It is hinted that once they were servants of evil, in the far reaches of history. Before the great leader Ker-Grol arose, his peoples were vile, evil killers. Dealers of death feared by all. It is said they were once even favored by the gods of evil and great fiends. This is rumor and myth only… but for the Grollen, it is an accepted fact. They believe to have lifted themselves up from the fiendish beasts they once were and are fiercely proud of their race’s accomplishments. But the dark stain of chaos and violence is still their weakness, and without a dark patron behind them to bind them together in purpose, they have seen their numbers decrease as the lands get settled and they must compete.

Into the Light: Once servants of darkness and evil, they threw off the yolk of their masters – Ker-Grol The Fierce slew the Ork champion Brutar Bloodgut and a personal fight, and walked away with his head. He then beat Quall Tolmarein to death, the priest of Everdark who had flogged them into battle for decades, with Brutar’s dented, helmet encased head. After, he ate his heart out of his chest in front of his stunned acolytes. His people turned upon their dark masters in numbers that day and walked out of the darkness in the light of, and howling under, the full moon. They were rewarded with the patronage of the Moon Mistress Ezrilus – who protected them from the curse of the Sun Bane and it is said tempered their evil with her love.