Part of the “Twin River Confederacy”, as it is known now, the combined alliance of East River Run and WEst River Run. ‘Twin’ has double meaning – the two named river counties, between 2 rivers – Beyne on the north and Nanford in the south. It is often used as an insult – in that many believe alliance with the Merchant Cities is what holds the Duke back from altering the economic situation in Dunstrand – particularly the Riverdans… who despise the confederacy’s authority.

Businesses and representatives of the Bank of the Silver Stacks are allowed in some places here.

Ruler: Count Badgericus; family Badgericus – currently Darnid ‘The Badger’. He is an older man and known for his political and military tenacity. 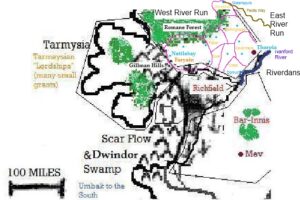