The Truth of Ishak IV

Levon Talklarr hand picks a strange team, working for the UPF commission on sentient rights. The team is let loose of all previous obligations – including serving in Star Law (honorable discharge). The new D9 – Delta 9 – is a Field Investigative Unit. We investigate abuses of sentient species. Its a non-attributable mission; the UPF has plausible deniability. We are given a scrambled satcom device and codes to contact UPF forces in orbit above Ishak IV. The Gear Load Out is simple –
Skeinsuit (100; half) vs. ballistic.
Light Shift Screen 1 against lasers.
TRACKED (L’il Bill)
-1 tangler
KE 1000 laser pistol; 4 20 SEU clips
8 -3 heavy rounds (88 dmg; -1 cs)
8 frag -3
2 gyrojet carbines (200)
2 maser carbines ()
2 tents/4 bags
water and rations for 12 days
2 “spy-eyes” – can hold a pair of rafflur M1’s or a grenade; 1km range, needs an interface or must return to review video

Adventure: 2nd Return to Ishak IV
Joonzey is crazy. We alsmot got killed simply coming on to the planet. He starts a fight at the drop of a hat, and he drops the hat. Never a dull moment. Medical supply cover is mostly blown when we get ambushed and unload with more fire power than security has here. We get a journalist contact. Track them – are we being followed? Evidence they have been kidnapped 2 weeks ago. Track down kidnappers using computer hacks by Adderahl to club on Chromium – city on Emerald Sea run by a major gang. LEarn they are out of town and target likely dead. The records from restored journalist files lead us to remote station on Ishak 4. Sentry guns and all. Computer hacks from Adderahland using the sand suit, we dismantle defenses. We get in, killing some robot guards. I sense strange alien presence. We sabotage enough to slow complex down in case something happens. We make it back to truck, contact orbiting UPF ship. Kinetic weapon drops on complex – EMP is triggered… we thinks its by the sentience i sensed earlier. With Bleeg’s hardware failing (heart, lungs partially mechanical) we are picked up going through a wadi by a group of rogue scientists watching the complex. They explain to us what they think it is and their understanding of the sentience. We decide not to tall UPF about them. Using all our martial skills and my mentalist defenses we hijack a shuttle and get off the planet.
FIU-D9 (the non-royal ‘we’) get as far as the orbital station before we’re told to ‘hold in place’. A Starlaw Organized Crime Division fast-deployment-detachment is on the way at high acceleration so please stand by to assist. (That’s some accountants, lawyers, technical investigators, and a couple platoons of Rangers.) When you uploaded everything you had to the UPFS Persuasive it was bounced it along to a Starlaw analytical AI; it took about a day for the analysis to make a case and Starlaw brass to authorize the take-down of the Valbergen Syndicate.

Tribu (tree-boo) grew up in a series of Osakarian Kibbutzes and Vrusk Monasteries. He contemplation skills were refined since a very young age. He grew up in a most insular culture – the “gypos” of the Osakarians – travelers and outcasts that plied the religious circuits finding identity in one cult after another, and stealing some from each and amalgamating them. He spent a lot of time alone, and liked to throw rocks in ponds at fish. By the time he was a young age he had learned to shield his mind as it constantly tried to communicate with others. All the “fake” rituals, myth, and legends came alive when he was 13. On a remote outpost, with his family following “Reverend Jones” to a near useless planet – planet Kareb on the Rim, in “Operation Koolaid” it was supposed to be the largest single coordinated drink in the history of the Rim Worlds. It was right at this moment when a wounded Sathar battlecruiser dropped into orbit seeking to make repairs and began to be blasted by the Rim Colonial Reactionary Brigade in orbit. Pieces rained down upon the gathering. In the ensuing fight with the Sathar survivors and the wreckage bombardment, Tribu demonstrated his psychic capability. He was seen and scooped up an elite squad of the Red Horse 272nd Star Law Marine Reactionary forces that were doing a cross training exercise on the planet. They hid him and got him to Star Law Psi-Ops, where he honed his abilities in infiltration and communication. He’s a bit of a poindexter. He adopts personas for each mission and switches out using them as needed to suit his mood and/or needs of the mission. 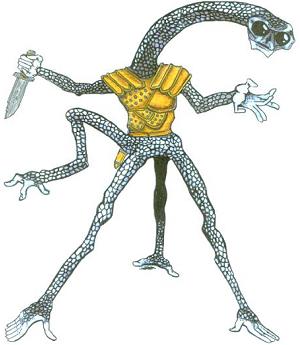